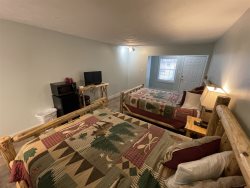 Prior to 1800, this area was the center of Cherokee Indian culture, with villages scattered throughout Nacoochee and what is now known as Helen valleys. A townhouse was located on top of at least one of the four ceremonial mounds in Nacoochee Valley. In 1813 the Cherokees approved construction of the Unicoi Turnpike, a wagon road through their Nation from the Savannah River headwaters to northeast Tennessee. This trail, now Highways 17 and 75, ran through the valleys toward Hiawassee. The Cherokees left the area on this “Trail of Tears”, and were replaced by white settlers.

Gold was discovered on Dukes Creek in Nacoochee Valley in 1828. The Great Georgia Gold Rush belt was bound by Dahlonega on the west and Nacoochee-Helen Valley on the east. Thousands of miners came into the Valley and mined in the foothills for over a century, generating thousands of pounds of gold. The historic England Gold Mine, site of Helen's current gold mine, and Hamby Mountain were mined extensively. Mining operations ceased by the end of the century, and settlers moved on.

Timber officials came into the Valley , saw huge virgin timber, and built a great sawmill, Matthews Lumber Company. Simultaneously, the Gainesville and Northwestern Railroad came up the Chattahoochee River to Helen. In 1913 the Valley was named "Helen”, after the daughter of the railroad surveyor. The lumber company, located in the center of Helen on the Chattahoochee River, continued sawmill operations until 1931, shipping to Europe and the U.S. until all timber was cut. Settlers again left for opportunities in other places. By the 1960's, there was nothing left except a dreary row of concrete block structures.

In 1968, local businessmen met to discuss what could be done to improve their town. They approached a nearby artist friend, who had been stationed in Germany. He sketched the buildings, added gingerbread trim, details and colors to the buildings, giving an Alpine look to the entire town. In January 1969, business owners and local carpenters began turning ideas into reality. Now all downtown stores have been renovated and many buildings and cobblestone alleyways added. Faces of buildings were painted with scenes of Bavaria and North Georgia, mirroring the migration of early settlers.


Because of this, tourism is the main industry in Helen, catering mostly to weekend visitors from the Atlanta area and also motorcyclists who enjoy riding the beautiful roads of Helen and its surrounding areas during all seasons. Helen is extremely crowded in late October, when autumn leaves typically peak. It also hosts its own Oktoberfest during September, October and November. There are many events and festivals throughout the year. One of the most well-known is Southern Worthersee, which is a stateside Volkswagen and Audi event that pays tribute to the Worthersee Tour in Austria with attendance of approximately 20,000 people. Also the annual hot-air balloon race held the first weekend in June, along with many others.

The main road through town is north/south Georgia 75. The Helen stream gauge (HDCG1) is located on its bridge over the Chattahoochee in the middle of downtown. A parallel route to the west is labeled Georgia 75 Alt to identify it as a bypass route around the town and its massive traffic jams in the autumn and on some weekends.

Unicoi State Park and Lodge, spanning 1,050 acres, is located immediately northeast of Helen on Georgia 356. The park encompasses Unicoi Lake, a 53-acre freshwater lake, offering outdoor activities for all seasons. Among them are a swimming beach, trout streams, wheelchair-accessible fishing docks, seasonal canoe, kayak and paddle boat rentals, seven picnic shelters with charcoal grills, three playgrounds for children, many spots for birding, 7.5 miles of hiking within the park (with adjacent trails in the Chattahoochee National Forest), 8 miles of mountain biking trails within the park, and plenty of places to enjoy the natural beauty of the lake and park. Access to Anna Ruby Falls, part of the Chattahoochee National Forest, is located through the park.

Smokey and the Bandit (1977) filmed a scene on Chimney Mountain Rd. just outside of Helen.


Helen, Georgia located a short 1.5 hours from Atlanta in the North Georgia Mountains is a small very quaint Alpine Village with something for everyone to do, fishing, swimming, tubing down the Chattahoochee River, rafting, hiking, golf, horseback riding, and much more. You can also enjoy a romantic carriage ride or enjoy international dining. We also have national forests, waterfalls, or just take a leisurely scenic drive.

Bavarian Brook Rentals is a North Georgia Vacation Rental company located in beautiful Helen, Georgia. A great way to enjoy a Helen Georgia Vacation is in one of our beautiful Condos or Cabins. Most located in the heart of Helen, Georgia in the North Georgia Mountains. Several of these units have private balconies overlooking the beautiful Chattahoochee River and they are located walking distance to many of the local attractions. They are great for a Family outing, romantic getaway, honeymoon, or just a quiet retreat in the North Georgia Mountains.

Jump to a Rental